Arrival and Departure
* Warsaw Chopin Airport is located approx. 10km away from the city center, which can be reached by bus 175 (during the day) and N32 (at night), by train, or by taxi (the taxi companies recommended by the airport are: Ele Sky Taxi – 22 811 11 11, Sawa Taxi – 22 644 44 44 and Super Taxi  – 22 578 98 00). For other taxi companies see: Taxis.
* Modlin Airport is Warsaw’s second airport, located some 40 km to the north of the city. Transport to Warsaw’s city center is available by taxi – the taxi company recommended by the airport is Sawa Taxi (22 644 44 44), which offers transport to the center for PLN 99 (PLN 149 at night). For other taxi companies see: Taxis.
Modlin Bus takes passengers from Modlin Airport to Warsaw’s city center  (a stop is located near the Central Railway Station – Dworzec Centralny) for PLN 33 (online price could be lower).
There is also the airport shuttle bus taking passengers to the train station in Modlin, from where there are trains in the direction of the Chopin Airport via Central Railway Station (latest schedule: www.mazowieckie.com.pl/en), for a total PLN 12.
* Train: Most international and long-distance trains stop at the Central Railway Station (Dworzec Centralny), which has good connections with all districts of Warsaw.
* For information on how to arrive to the hotel you will be staying in, see Hotels.

ATMs and Money
The currency of Poland is the Polish Złoty, 1 PLN = 100 groszy (gr).
1 USD ≈ 3.15 PLN
1 EUR ≈ 4.10 PLN
Current FX rates: EUR/PLN, USD/PLN
In some larger stores you can pay in euros, but  a) you need to notify the cashier in advance, b) this is rather unpopular, and chances are that you will receive change in PLN.
Currency should be exchanged in registered, official, commission-free exchange points only; it is advised to avoid currency axchanges at the airport and the main railway station. Average exchange rates can be checked on the website of the National Bank of Poland.
ATMs can be found in every bank, outside of most banks, at the airport, railway station, and all around the city center.

Brazier
A metal container for holding live coals or other fuel, as for providing heat and light, but may also be used for cooking and cultural rituals. Braziers were extensively used in Poland during the Martial Law declared on December 13, 1981 to heat soldiers guarding the streets. On especially cold winter days in some cities, including Warsaw, braziers are placed e.g. next to urban traffic stops.

Chopin’s Benches
Warsaw’s center is market with 15 multimedia benches dedicated to Fryderyk Chopin, each of which bears a description of the particular spot, a button to play a particulart piece of Chopin’s music, and a photo code to download supplementary applications from the internet. One of those benches is located just outside the Staszic Palace building, and others on the way to the Old Town, and i.a. in the Royal Łazienki Park. For a list of all Chopin’s Benches and more about the initiative click here.

Computers and Internet
Participants of the conference and workshop will be able to use the computer labs of the Institute of Philosophy and Sociology using login information provided by the organizers.
Wireless internet is available in both hotels where participant will be staying: Dom Chłopa and Hera.
Map of free internet hotspots in Warsaw center

December 10-15 in history (very subjective selection)
* 10 December
1924: Władysław Reymont received the Nobel Prize in Literature,
1980: Czesław Miłosz received the Nobel Prize in Literature.
* 11 December
1866: First horse tram in Warsaw.
* 12 December
2002: The artificial palm tree, a project by Joanna Rajkowska, was placed in the centre of Warsaw’s de Gaulle Square.
* 13 December
1981: Martial law was introduced in the then People’s Republic of Poland, with, among others, a ban of organisations and gatherings, detainment of opposition activists, curfew, sealing off borders, control of population mobility, disconnection of phone lines, and the censorship of correspondence.
* 14 December
1950: Poland’s government decided to build a metro (subway) line connecting both sides of the Vistula (east-west). Construction started in 1983 according to a changed plan (north-south), and was completed in 2008.
* 15 December
1951: First public TV broadcast in Warsaw.

Electricity
In Poland, the voltage is 230V, 50 Hz. The plug is the standard European double plug. 110 V/60 Hz electrical equipment requires an adapter, which can be purchased at the airport, in electronics shops and supermarktes (e.g. Saturn or MediaMarkt).

Hospitals and Pharmacies
In Warsaw there is a pharmacy on every other corner, especially in the city center. The closest pharmacy to the conference and workshop venue is just on the other side of the street on Krakowskie Przedmieście number 1. For a list of 24/7 pharmacies click here.

Human Rights
* Warsaw’s WATCHDOCS. Human Rights in Film Festival will be held in December 7-16, 2012, screening almost 90 documentaries from all over the world. Program
Festival cinemas (see

Jogging, running & nordic walking
Warsaw is host to numerous running events, including the Warsaw Marathon and Run Warsaw in fall, the Warsaw Halfmarathon in spring, as well as the Ecco Walkathon. There is also a number of smaller events, such as the Santa Claus Race, this year on Saturday, December 8th.
Most popular jogging and running places are of course parks, especially the Royal Łazienki Park, and the Bielański Woods, as well as the walking-jobbing-biking path along the Vistula.

Parking
The whole of the centre of Warsaw is a paying parking zone. This rule applies from Monday to Friday, from 8 am to 6 pm. On Saturdays, Sundays and public holidays parking is free. More about parking in Warsaw.

Parks
For a full list of parks and gardens look here.

Public transport
The public transport network in Warsaw consists of busses, trams and a single subway (underground/metro) line, and is a rather afficient means of transport in the city. Tickets may be purchased in kiosks, many shops, at post offices, stationary ticket machines, ticket machines inside select vehicles, by mobile phone or on-line.
A regular single fare ticket costs PLN 3,60 (within the city of Warsaw, i.e. zone 1), a 1-day regular travelcard costs PLN 12, and a 3-day travelcard costs PLN 24.
The full list of available short- and long-term tickets may be found here and the map with ticket sale points is here.
It is often useful to plan the route using this on-line route planner.

Safety
Warsaw may generally be considered as a fairly safe city. However, as in all large cities, you
should always take good care of your belongings to prevent pick-pocketing, especially in public transport and crowdy places, and rather avoid walking in remote quarters.
The U.S. Department of State on travel abroad and on Poland, in particular.  Some safety tips from the U.S. Department of State.

Shopping
A variety of stores, shops, and boutiques can be found in the Złote Tarasy shopping mall.
Marszalkowska, Foksal, Nowy Swiat and Krakowskie Przedmiescie are the most populat commercial streets in the city center.

Weather
Warsaw’s climate is in the transitional zone between oceanic and continental with cold winters and mild summers. The average temperature in Warsaw in December ranges between -3 and +1 ºC (26 to 34 ºF), although it may get as cold as -20 ºC (-4 ºF), or as warm as +15 ºC (59 ºF).
Current weather conditions and forecasts
Average weather conditions 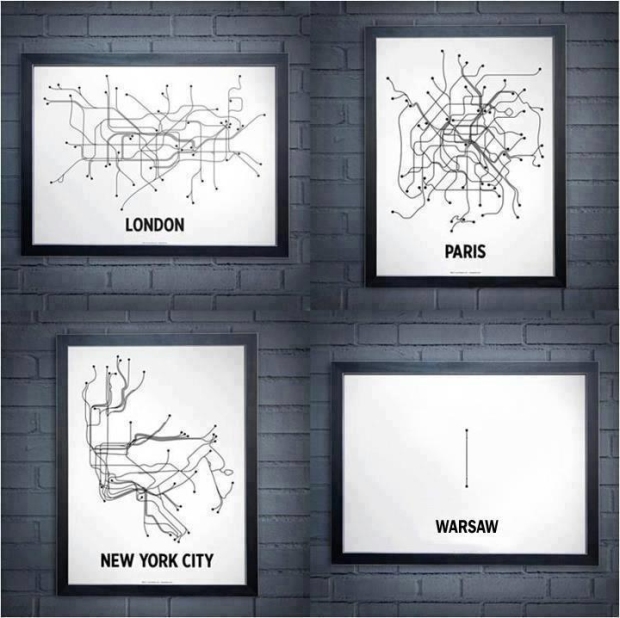